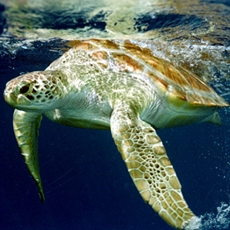 Sea turtles spend most entire life by swimming across the oceans. During the reproduction period, mature turtles swim from the far away for breeding. They choose some quite beaches as their nesting grounds, and returning to sea; let young turtles hatch themselves from the eggs. After hatchling, young turtles are still tiny and their shells are not strong so they have to rapidly crawl to the pelagic sea in order to avoid various predators which inhabit in coastal areas. However, only a young turtle of a thousand of them can survive to mature turtles that can produce other generation of turtles.

Within the last twenty years, sea turtles have been threatened, a lot of them were caught for various purposes; food made from eggs and muscle, home decorations made from carapaces, leather goods made from turtle’s skin and the fat derived from sea turtle which is also extracted for soap or expensive perfume production. Besides, the sea turtle’s eggs were collected by the commercial concessionaire under the condition written that the 20% of collected eggs must be hatched and returning those hatchings to sea.