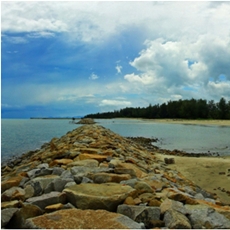 The coastal areas with tidal flat are mostly abundant with mangroves forest, for example, the areas in the Upper Gulf of Thailand where fine sediments are deposited. The mangroves have been cleared for communities, residences, and shrimp farms, causing in extensive deforestation of mangroves and the severe erosion of coastline. On the mainland beach, the erosion is extensively occurred since there are constructions obstructing the direction of the current, causing the erosion problems in nearby areas. Moreover, the erosion is also caused by a lack of sedimentation and sediment supply due to various ways such as the constructions (dams, bridges, roads, etc.) obstructing the flow of rivers, river sand mining, removal by strong waves during monsoons, deforestation, and human activities along the river. These factors cause a reduction of the sediments in rivers that directly affects to coastal sediment supply.