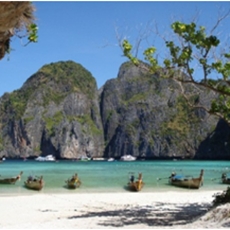 Island means any parts of the land with surrounding water and is smaller than the continental land. Island is formed by cutting some areas off from the mainland by erosion processes influenced by waves, currents, and volcanic activities that cause the elevation of the earth crusts raised above sea surface. Moreover, it is also created by coral reef formation. Island can be classified based on the geographical location into 2 types as follows:

Continental island is located along the coast not far from the mainland. Most continental islands have similar geological characteristics with the nearby mainland since they are once the same part of the mainland, later they are cut off from the mainland due to a movement of the earth crust or erosion influenced by wave and water current. All islands along Thailand coast are continental Island. Base on the geological evidences, it is indicated that Ko Phuket and Karst mountains in Phang Nga Province were once connected to the mainland and later were cut off by the sea.

Oceanic island is the island located very far from the continent, and generally it is in the ocean, its formation is not related to the mainland. The islands include volcanic island which formed by volcanic activities under the oceans, and coral island that is originated by the coral reefs off the coast, the sand dune is occurred on the island due to the gradual accumulation of sand sediments. Later, the rise of the earth crusts leads the island becomes higher and other processes, such as the plant seeds may be transported from the mainland by currents and birds, that enhance plant to grow on the islands. (Source: http://www.md.go.th/ interest/coast.php, accessed on 15 December 2012)