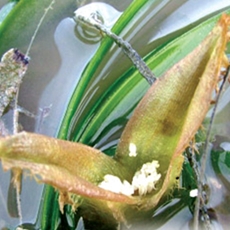 The conservation and seagrass restoration

In the past, the management and the conservation of coral reefs and mangroves were paid attention, while people paid less attention to seagrass's conservation and management since the researchers and basic knowledge on seagrasses were scarce even though there were some seagrass studies under the ASEAN-Australia Project: LCR since 1984. Later, the UNEP GEF Project which is the regional level was initiated in 2002 and supported by the Global Environment Fund in order to prepare for strategic programs on the management of natural and marine resources in this region and to promote collaborative problem solving and boost up the potential on integrated management among countries including Cambodia, China, Indonesia, Malaysia, Philippines, Thailand, and Vietnam. The projects focused the main resources such as mangrove forest, coral reefs, seagrasses, wetlands, land-based pollution and fisheries. In this project, the status of resources was summarized including problems and impacts found. Each country proposed as the demonstration sites and integrated management were applied in the demonstration site. In the first stage of implementation regarding seagrasses, meetings among several organizations; non-governments, local peoples and governmental organizations were conducted for gathering data collection regarding the seagrass in the Gulf of Thailand. These data were used to help develop the draft of national plan for sustainable seagrass management.

However, in 1991, the plan for seagrass conservation was created by the collaboration of NGOs, local people, local governmental agencies to monitor and protect seagrasses form fishing gears in the Andaman Sea covering the seagrass areas in Hat Chao Mai, Ko Talibong of Trang Province and Ban Pa khlok of Phuket Province. However, some seagrass areas were still degraded due to high sediments which cannot be controlled yet. Hence, advanced knowledge is required for the future planning.

Conservation and management of seagrass are currently awakened throughout the world. Many NGOs and International Partnerships for seagrass monitoring and surveys have been established such as Seagrass Net (www.seagrassnet.org) and Seagrass watch (www.seagrasswatch.org). In Thailand, training the member on monitoring seagrass was held at Tang Province in February 2006 by Department of Biology, Prince of Songkhla University. Within the previous 2-3 years ago, Mahidol University collaborated with Department of Marine and Coastal Resources and other institutions established the National Seagrass Master Plan. Currently, the National Seagrass Master Plan for the Gulf of Thailand has been completed.

Study on the status and monitor seagrass change in each area and apply the previous data in order to predict the possible trend in future, i.e., producing seagrass map and database of seagrass and other biological resource in seagrass.

Increase awareness on protection and conservation seagrass areas for all sectors.

Specify the framework for conducting research and enhance knowledge about seagrass restoration as well as provide knowledge to people.

Establish the strictly protective measures for the seagrass areas that located outside the Marine National Park and establish the marine protected area by applying the participatory management with coastal communities that have impacts with the MPA establishment.

Find out the measures to control and protect impacts from coastal sediments such as topsoil removal in coastal areas, marine mining, dredging, and other coastal development.

Enhance knowledge regarding benefits and importance of seagrass ecosystem through mass medias that are in accordance with the target people such as fishers and other people who utilize marine and coastal resources including the local administrative officers.

Hold the seminar on seagrass conservation for small- and medium-scale fishers who do fishing within seagrass beds.

Establish the national master plan for seagrass management to be used a conservation framework for governmental agencies and communities.

Seagrass restoration is also important options that should be done together with conservation. Presently, the seagrass transplantation is usually applied in the areas where the seagrass beds were formed in the past resulted from anthropogenic or natural threats and the empty areas where no previous seagrass beds have been formed. Methods used for planning seagrass are as follows:

Seagrass transplantation can be divided into 2 options as follows:

Take seagrasses out of the parental stocks, clean, and plant it in the transplanted areas (this method was popular in the past, used in the early stage of the seagrass transplantation project)

Dig out the seagrass with sediments from the parental stocks and then plant in the transplanted areas. Success of this method has been reported that the transplanted seagrass can be successfully grown and generate their leaves, rhizomes and flowers.

Dig out seagrasses with sediments and then put it in the cylinder container such as PVC tube, before moving to them to plant in transplanted areas

Each single seagrass is attached along the tube with the certain distance before transplantation.

Seagrass is attached in the wirenetting before transplantation.

Young seagrass is fixed to the plastic anchor before transplantation.

However, in seagrass transplantation, the considerations that should be concerned are shown below:

Each species of seagrass distributes at different depth.

Each species of seagrass likes different soil types, for example, Enhalus acorides can be well developed in mud, while Halophila ovalis grow well in sandy mud with calcareous shells.

Most seagrass beds are distributed next to the mangrove forest, estuary sand bar is appropriate for seagrass growth.

In transplantation, the impact of taking too much seagrasses on parental stock must be concerned. Tanking the seagrass should be randomly distributed.

Transplanted areas that are exposed to strong wind or water current might be easily destroyed.

In addition, there are other factors that could support successful seagrass restoration such as providing knowledge to the communities, increasing their awareness with the importance of seagrass to local community leader, collaborating between community and government to cooperatively manage natural resources, controlling of use of destructive fishing gears like trawl nets, push nets, seine nets etc, using area – based approach to mitigate all seagrass threats by considering all relationship and connection among marine and coastal ecosystems. 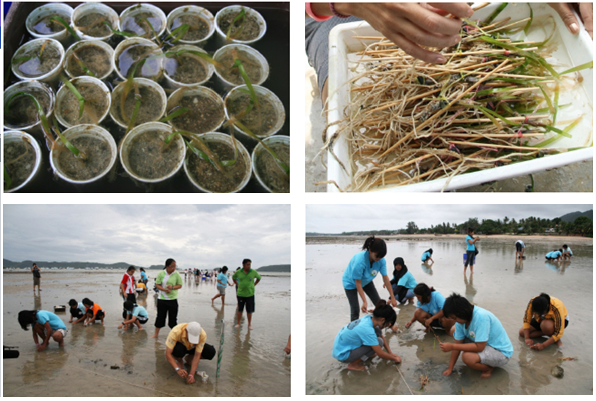 Seagrass cultivation can be done by using seeds of seagrass. The seeds are treated and cultivated until the seedlings have complete roots. After that, They will be then planted in the appropriate areas. The seedlings of the seagrass are attached with biodegradable fibers or nets which can be degraded itself without generating any pollution. It was found that seagrasses are well developed using this technique. However, the amount of seagrass seed that is available in nature should be concerned, and the seed have to be enough for natural reproduction. (Poovachiranond, 2006)