When we sail through a canal in mangrove forests, we cannot find any coral reef; this is because the low salinity and high sedimentation environment is not appropriate for coral to survive. We may found small colonies of corals along rocky coast if we reach to estuary where the water becomes more salty and transparent. However, only some corals can adapt to live and be patchy distributed within this environment. The true coral reefs can be found beyond esturies and rivermoths where the environmental conditions are appropriate including high transparency, enough sunlight penetration, availability of hard substrates for coral recruitment, without freshwater run-off and strong waves. 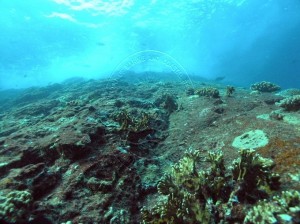 Figure  Rocky shores with patches of corals on the Western Coast of islands ,
Andaman Sea  affected by the Southwest Monsoon
The Phuket Marine Biological Center, Department of Marine and Coastal Resources reported that coral reefs in Thailand distribute along the coasts of many provinces except the provinces located in the Inner Gulf of Thailand, i.e., Chachoengsao, Bangkok, Samut Prakan, Samut Songkhram, Phetchaburi and Pattalung. Distribution of coral reef was broadly divided into 2 zones as follows: