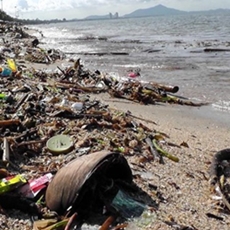 Marine debris is the hard materials that have been intentionally or accidentally released from industries or any production processes into the marine and coastal environment. Marine debris consists of any materials that produced and used by human and intentionally left into the sea, river, or even on the beach. It is also carried into the sea by river, waste water, strong currents and winds, including the objects lost during the bad weather, or left by human or other such as fishing gears and containers of marine transportation. Marine debris can be found close to the point sources; however, most of them can be moved far across the sea by currents and winds. Hence, marine debris is often found all over the world, not only in the shorelines but also in the offshore islands and in the Polar Regions. It’s also found on sea surface, in the middle of water column, and sink to the different depth of seabed.

Marine debris is originated from two major sources, the land-based source and sea-based source. The land-based source includes community solid waste landfills, waste collection and transportation, runoff during heavy rains that can flush such wastes into the sea, industries and manufacturing sectors, improper waste management, and other natural phenomena. While, sea-based waste could be generated both in the ocean and the coastal sea such as marine transportation, cruises and tours, marine and coastal fisheries, oil and gas platforms, tourism activities, coastal aquaculture, etc. (Marine debris database, Department of Marine and Coastal Resources, Retrieved from http://www.dmcr.go.th/Thailand coastalcleanup/ on January 14, 2013)