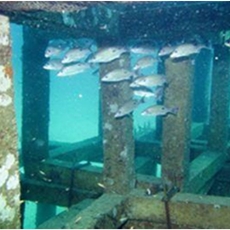 The construction of artificial reefs in Thailand has been initiated because of the problems on depletion of fishery resources. In particular, trawls were introduced in Thailand’s fishery since 1960, causing that many benthic animals have been intensively caught over the natural capacity. However, creating an artificial reef that, for Thailand, is not a new idea because it is what the fishers have been doing since the past and are still operating nowadays. In the early stages, the artificial reefs were made from materials that are easily found such as coconut shells, bamboos, and twigs; those are tied and submerged in the middle of water column, called by local fishers as “Soang” (Somporn B.E. 2537). Currently, used materials such as concrete pipes, used tires, etc., are applied to produced various types of artificial reefs (Sunantha, B.E. 2550). Additionally, pyramid-shaped structures and various sizes of cube-shaped concrete, are also applied as well as other materials such as train bogies, cars, containers etc.