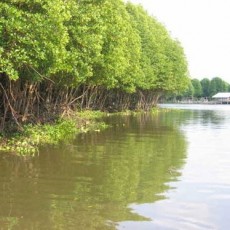 Types and the distribution of mangroves

Types and characteristics of mangroves

The mangroves are made up of various different evergreen plants. They physiological adapt themselves to be able to survive in marine waters. They cannot directly use salty water as fresh water, so they have to absorb and store the water in the stems as much as possible and prevent the evapotranspiration by coating their leaves with Cutin, while, some species store the water within the special cells in the leaves. It is found that the concentration of minerals in the cells of mangrove tree is rather high comparing with other plants, so, salt glands the mangrove tree are developed in order to regulate the salt concentration within their cells.

Since the mangrove forest are located in the regular inundation areas, therefore, the areas are regularly flooded causing the lack of oxygen within the soil. Whiles, oxygen is still required for mangroves to be survived, pneumatophores or air roots are developed to have more oxygen by extending upward from the underground roots above the soil surface. The plants of genus Rhizophora are dominant and the other 78 species of mangrove trees.

Six types of mangrove structure have been suggested by Kathiresan (2013) (as shown in figure 2), can be summarized as:

Overwash mangroves are found on tidal flats and regularly influenced by tides; it looks like an island during high tide.

Fringing mangroves are situated on the coast with low steepness, generally found in exposed bays of mainland coast and large islands with mild influence of waves and storms. In the island coast, it is also found at the highest tide elevation.

Riverine mangroves are situated along rivers or creeks or fresh where the freshwater is flowing into the sea.

Basin mangroves are located at low and inundated areas connecting to the terrestrial forest. It is inundated by fresh and brackish waters with long period of time. Some epiphytes such as orchids could be found within this type of mangroves.

Scrub/Dwarf mangroves are found in the areas with the dryness that limit the growth of mangrove. Scrubs and shrubs of about 2 meters tall are dominated within the scrub mangroves.

Hammock mangroves are quite similar to the basin mangroves except that this forest is occurred in more elevated area than the other types.

Watson (1928) divided the zones of the mangroves at the Western Malaysia suggesting the five zones which were ranked by considering the frequency of tidal inundation as a main factor. It can be summarized as the following:

Zone 1: the areas are inundated by all high tides, only Rhizophora mucronata can be grown in this zone.

Zone 3: the areas are inundated by normal high tides and dominated with various species of mangroves tree, especially genus Rhizophora. Besides, Ceriops tagal, Xylocarpus granatum, Bruguiera parviflora can also be found in this zone. 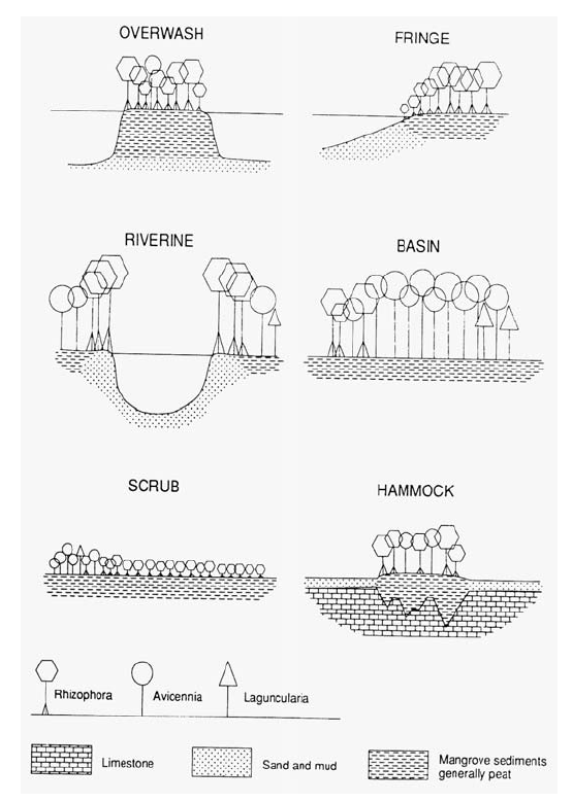 The mangrove distribution in Thailand

The mangroves along the estuary or brackish water

This kind of the mangroves is found along the coasts or small estuaries, which are insignificantly influenced by freshwater, where small amount of freshwater flows into the mangroves and most areas are dominated with seawater.  Sa Nga et al (B.E. 2530) classified the mangrove zone in Thailand as the followings:

Krabi Province: Rhizophora mucronata and R. apiculata are dominated in the front zone, followed by the genus Ceriops. The mixed mangroves of the genus Ceriops and Xylocarpus are found after the previous zone. The back zone is dominated by Lumnitzera and Phoenix.

Trang Province: The genus Sonneratia and Avicennia are found in the front zone while the genus Rhizophora and the mixed mangroves of the genus Ceriops and Xylocarpus are found at the middle and the back zone, respectively.

Satun Province: The genus Sonneratia and Avicennia are found in the front zone while the other consecutive zones are dominated by the genus Rhizophora, the mixed mangroves of the Sonneratia and Avicennia, the mixed mangroves of the genus Ceriops and Xylocarpus, and the genus Lumnitzera, respectively. The back zone and the destroyed areas are dominated by Acrostichum aureum.

Figure  Types of mangroves in Thailand

Generally, the environment in mangroves is highly different from that of other forests, especially soil in mangroves which is abundant with nutrients from the coastal erosion, rivers and the organic matters that are derived from the decomposition process of the leaves, phytoplankton and algae in mangroves. The salinity of water in mangrove is quite low and varied by tides and amount of freshwater from the rivers and channels. Animals living in the mangroves are influenced by the environmental conditions that are different from terrestrial forests, especially, various benthic organisms which inhabit on the ground or in the mud as well as in the water column. These benthic animals such as shells, crabs, shrimps, worms, flat worms, polycheates, etc., have to adapt themselves to the changing environments that affect on their survivals like water loss, high temperature, low oxygen environment and salinity change. A high biodiversity of mangrove communities are resulted from a composition of various organisms that are able to adapt to survive in this environment, serving as nursery grounds and habitats for many important economic species.    The environmental factors which play an important role for their survivals are the geography that mangroves which are located in coastal muddy flat with regular tidal inundation. The important environmental factors include:

Climates including light, temperature, rain, wind; most of the mangroves are only found in tropical zone where the tropical climate is suitable for their growth.

Tides are the main factor influencing the zones of mangrove plants or aquatic animals. Tidal ranges influence on the physical characteristics of plant structures, especially, the aeration root which are big, above the ground. The height of this root is resulted from on the tidal range.  The more tidal ranges are wider, the higher roots are developed.

Waves and currents help blow the seeds of the mangroves into other habitats, distribute nutrients to the sea that benefit to other aquatic life and coastal aquacultures. Besides, waves and currents are an important factor for coastal sedimentation process.

The dissolved oxygen is important to plants and animals; it also controls the types and growth of plants and distribution of aquatic organisms. Furthermore, The rate of decomposition is also affected by the amount of dissolved oxygen.

Mangrove soil is resulted from the deposition process of sediments flowing with water from various sources as well as the decomposition of the organic matter. Soil is important to the growth and distribution of plant and animal in mangroves, for examples, The Rhizophora mucronata is well developed in muddy substrate, while the sandy muddy substrate is suit for the Avicennia marina and Bruguiera gymnorrhiza to grow.

Nutrients, that is vital for the survival of organisms in the mangroves, are derived from both outside and inside the mangroves, that are, rain, rivers, sediments, sea, and the decomposition of organic matter in the mangroves from phytoplankton, diatoms, bacteria, algae, plants, dead animals, etc.